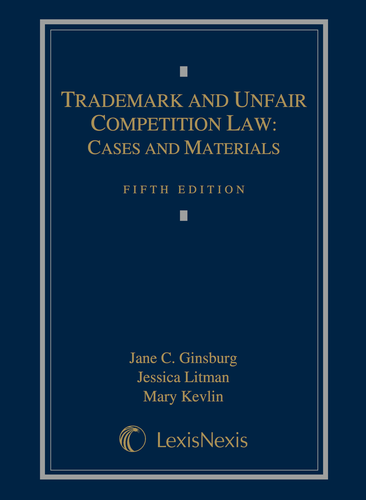 Already purchased in store?
or

Trademark and Unfair Competition Law, in its entirety, can also be found on Lexis Advance. Students who have access to the platform through their law school will be able to access the content at no charge.

The Fifth Edition of Trademark and Unfair Competition Law: Cases and Materials retains the successful features of earlier editions, but has been thoroughly updated since the last edition was published in 2007.

The Fifth Edition also includes the Statutory Appendix within the book so students will not have to pay for an additional book and they will have fewer books to carry to class. A comprehensive Teacher's Manual is available to professors.

Internet-related trademark disputes now arise in every corner of trademark practice and appear in nearly every chapter. In particular, the Fifth Edition explores controversies concerning trademark "use," infringement, and secondary liability, all areas which courts have significantly elaborated since the previous edition. The Fifth Edition continues to present the special problems posed by trademarks and domain names in a separate chapter.

In addition, trademarks (or the claims of their owners) have encroached on the subject matter of patents and copyrights, and have been brought to bear on a variety of expressive uses of marks, so have defenses to infringement expanded. The Fifth Edition now devotes a full separate chapter to statutory and judge-made defenses. The former chapter on authors' and performers' rights has been revised into the chapter on false designations of origin and a new chapter on defenses.